skip to main | skip to sidebar

Next shop updates and a free pattern

I bring you news that I'm planning to trial a new system of shop updates by uploading a few items at a time over the next week (from 30th Jan.) at random times during the day and night. There's likely to be a little bit tomorrow or Saturday, and then more at the beginning of next week. Shall I post back on here when all the updating is complete?

It's not an ideal system, but I'm hoping I'll have a greater supply of hand-dyed to bring you from the summer onwards when my circumstances change and I can increase the numbers of days I can be in the workshop dyeing with the possibility of a helper! More skeins of the same colourway (though not so many as to detract from the unique feel of each skein), more colourways, more chance to project-plan... 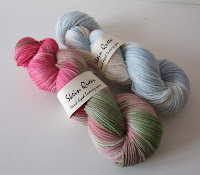 This Plump Plushness will be included in the updates - it's as if the Plushness has over-indulged at Christmas-time and is bulging out of its yarn band! I know the feeling! The Pink Lady Apple makes an appearance in Issue 2 of The Knitter which is more than a little bit exciting...

Also, just a reminder for those of you in the S.E. of England, that I'll be bringing lots of hand-dyed yarn to the Unravel show at Farnham Maltings on 21st February. It's already looking like a bit of a SQ meet-up and it will be great to meet so many of you.

This looks interesting - UK DIY exhibition opens at the Turnpike Gallery (which I think is in Wigan?) on 14th February and includes a film on the Handmade Nation movement which "explores a burgeoning art community based on creativity, determination and networking." Their blog is interesting in itself - latest entry is on yarnbombing which has made it into the national newspapers recently.

The Zig and Zag Sock Yarn pram blanket is finished, bar sewing in all the ends, which won't be quite as bad as it looks, as I worked half of them into the knitting but it's Off the Needles which I have mixed feelings about. I designed it to be a blanket I wouldn't get bored with, and it worked!

The pattern was fairly simple and I've detailed it below. I'm sure it could be written more elegantly, but it's what worked for me. You could use a more limited palette and switch between fewer colours or knit more pattern rows in the same colour for wider chevrons. It could be easily adapted to become a scarf. 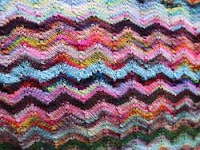 I only used a very small amount of each, enough for four rows, though you will need a larger quantity of the colour which forms the border and is knitted in garter stitch.

Choose your border colour and wind off a good handful of it into a separate ball. This will be used for your left-hand border.

Continue in same colour for next four rows:

(Note: this is new, improved pattern for row 1 - if you need the original, it's at the end of this post.)

Knit first 5 stitches in border colour, change colour, incorporating one end of the new colour into the first four or five stitches of the work whilst maintaining pattern. Knit the last 5 stitches using the small ball of border colour.

After knitting the four rows of pattern, switch to another colour if desired, remembering to knit the first and last five stitches in border colour.

Knit to desired length. I used 42 repeats of the 4-row pattern.

Abbreviations:
KFB - Knit a stitch, leaving stitch on left needle; knit into the back loop of this stitch
Sl 1 - Slip a stitch knitwise
PSSO - pass slipped stitch over
M1 - make one by picking up loop between stitches and knitting into the back of it

Amazing, I am in that exhibition too - I think it's in Manchester though or am I geographically challenged???

Oh, is that the one you're doing? Rockpoolcandy gave me the link. Greater Manchester perhaps?

Thanks very much for the pattern!

Thank your for the pattern. I hope the blanket that I knit for my neighbor's baby to be is half as lovely as yours!

That is a lovely blanket, thanks for the pattern.

Welcome to the world of the Skein Queen

Whitterings about my passion for hand dyeing yarn, knitting, spinning and other bits

Skein Queen
A Scottish girl living in England, married to a Northern Irish man with two English children, one boy, one girl. My week isn't complete without dyeing yarn, knitting, spinning, reading blogs about dyeing yarn, spinning and knitting... you get the idea.